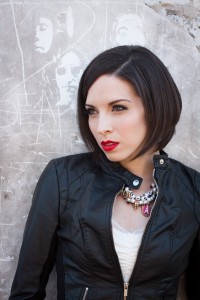 Courtney Alameda’s spent her entire career trying to con and cajole people into reading great books. A veteran of the big-box bookstore trenches, Courtney now works as a librarian for the prettiest library you’ve ever seen, where she spends her time ordering large stacks of YA books, doing readers’ advisory, and dressing up as various mythical creatures for a variety of library events.

Courtney holds a B.A. in English Literature with an emphasis in Creative Writing from Brigham Young University. She is represented by the amazing and talented John M. Cusick of Greenhouse Literary. A Northern California native, she now resides in Utah.

When a routine ghost hunt goes awry, Micheline and the boys are infected with a curse known as a soulchain. As the ghostly chains spread through their bodies, Micheline learns that if she doesn’t exorcise her entity in seven days or less, she and her friends will die. Now pursued as a renegade agent by her monster-hunting father, Leonard Helsing, she must track and destroy an entity more powerful than anything she’s faced before . . . or die trying. Lock, stock, and lens, she’s in for one hell of a week.

SHUTTER is available for purchase at Amazon, Powell’s, Books A Million, Barnes & Noble, and Indiebound.

Randi: The concept of SHUTTER is incredibly unique! How did you conceive the idea?

Courtney: Thank you! All my novels generally start with the wisp of a character—in SHUTTER’s case, I saw a girl fighting a massive ultraviolet ghost, armed only with a camera. She piqued my curiosity, and the more I followed her around on the page, the more I came to know about her world of tetrachromats, necrotic monsters, and ghosts.

Randi: Imagine your perfect reader. How would you describe that person?

Courtney: I don’t think my perfect reader is any different from any other writer’s—all a reader needs is to heed the call to adventure, right? Oh, and a few spare hours is always nice!

Randi: When and how did you know that you wanted to be a writer?

Courtney: I had dabbled in writing all my life, but I didn’t get serious about the craft until I stumbled across Garth Nix’s SABRIEL in college. Between Nix’s novel and Neil Gaiman’s STARDUST, I knew I’d found my calling.

Courtney: Messy! I’m a pantser, so the first draft of SHUTTER is wildly different from the last. To put it into perspective, I wrote some 500,000 words toward the book, total, while only 95,000 made it into the final draft. I believe in making mistakes while writing, and very much believe Gaiman is right when he says, “Make interesting, amazing, glorious, fantastic mistakes. Break rules. Leave the world more interesting for your being here. Make good art.”

I AM THE MESSENGER, by Markus Zusak

The only one she ever mentions is DRACULA, so let’s go with that.  🙂

Music to write by?

Florence + the Machine or Marina and the Diamonds

Writer you’d like to have lunch with (dead or alive)?

SHUTTER is available for purchase at Amazon, Powell’s, Books A Million, Barnes & Noble, and Indiebound. 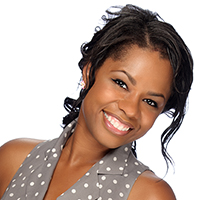 Randi Pink is a writer and graduate student of creative writing at University of Alabama at Birmingham. In March of 2013, Randi was working on an assignment for a Children’s Literature course when she conceived the idea for her debut novel. After reading the first fifteen hundred words aloud in class, she realized that the world was ready for TOYA and she got to work.

Her debut YA novel, TOYA (Feiwel and Friends/Macmillan, Spring 2016), is the story of sixteen-year-old Latoya Williams, a black girl who attends a mostly white high school in the Bible Belt. In a moment of desperation, she prays for the power to change her race and wakes up white.

One thought on “The Debut Club: An interview with Courtney Alameda, author of SHUTTER”