Sweet Sixteener Jessica Cluess recently spoke to Fearless Fifteener Becky Wallace about her YA fantasy novel THE STORYSPINNER (March 3, 2015 from Simon and Schuster). 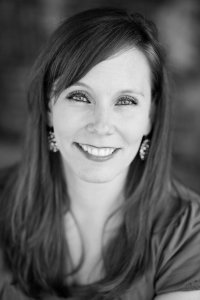 In second grade, Becky Wallace had to sit in the corner because she refused to write anything except princess stories and fairy tales (and because she talked too much). Her time in isolation gave her plenty of opportunities to dream up the fantasy worlds she’s been dabbling with ever since. She was lucky enough to find her own real-life Prince Charming. They have four munchkins and live in a happy little town near Houston, Texas.

In a world where dukes plot their way to the throne, a Performer’s life can get tricky. And in Johanna Von Arlo’s case, it can be fatal. Expelled from her troupe after her father’s death, Johanna is forced to work for the handsome Lord Rafael DeSilva. Too bad they don’t get along. But while Johanna’s father’s death was deemed an accident, the Keepers aren’t so sure. The Keepers, a race of people with magical abilities, are on a quest to find the princess—the same princess who is supposed to be dead and whose throne the dukes are fighting over. But they aren’t the only ones looking for her. And in the wake of their search, murdered girls keep turning up—girls who look exactly like the princess, and exactly like Johanna. With dukes, Keepers, and a killer all after the princess, Johanna finds herself caught up in political machinations for the throne, threats on her life, and an unexpected romance that could change everything.

THE STORYSPINNER is available from Amazon, Powell’s, Books a Million, Barnes & Noble, and Indiebound.

Jessica: I loved the world and culture of THE STORYSPINNER. It had a South American vibe, very different from most fantasy. What inspired you to create this unique setting?

Becky: I toured southern Brazil for a month after my freshman year of college. I didn’t spend a single night in a hotel, always bouncing around to a new host family in a new city every couple of days. It was an incredible, unique experience! I knew when I started THE STORYSPINNER that I wanted to incorporate some of that setting into the book. The mango orchards, araucaria pine trees, dark sand beaches, and fabulous food were things I experienced first hand. The rest is just imagination.

Jessica: You have multiple points of view in this story, as opposed to telling the tale solely from Johanna’s perspective. What led you to structure the book this way?

Becky: When I submitted the manuscript to publishers there were only three points of view—Johanna, Rafi, and the Keeper Jacare—and two distinct plot arcs that eventually converged. My editor suggested that I flesh out the secondary characters and add the additional story lines.

Jessica: Do you outline much, or are you a pantser? Or a combination?

Becky: I’m sort of a hybrid, I guess. I pantsed my way through THE STORYSPINNER, but all my subsequent books (so far) have been written off a very specific synopsis. I actually prefer pantsing! I love it when my characters surprise me, but my editors seem to like knowing what’s coming before it lands on their desks!

Jessica: Have you always wanted to be a writer?

Becky: Yes and no. I started writing books and plays when I was very young, and shared those stories with my closest friends. But when I got to college, I felt like I needed a degree that was guaranteed to lead to a career—and writing books wasn’t it. So I got a degree in public relations, worked in minor league baseball, as a book publicist, and as a journalist for a long time before finally circling back to writing fictional stories. I guess I’m a little more pragmatic than some of my other author friends!

Chocolate—as long as it’s not American.

If I have to pick just one, I’ll pick the originator of so many others: The Lord of the Rings.

Favorite music to write to?

I love acoustic covers of popular songs and have an entire Pandora station devoted to it!

If you weren’t a writer, what else would you be?

A baker. I didn’t really know how to bake until recently and had no idea how much happiness I could find in the kitchen.

Both? Neither? I have four small children and steal writing time whenever I can find it.

Dragon for sure! If I’m going to be a mythical creature, I want to be able to fly and toast my own marshmallows.

THE STORYSPINNER is available from Amazon, Powell’s, Books a Million, Barnes & Noble, and Indiebound.

Jessica Cluess grew up in Los Angeles, moved to Chicago, and then moved back when the weather became too weather-y. She now lives and works in a place full of sunshine and traffic. A graduate of Northwestern University, she uses her education to analyze the subtle and intricate history of the Victorian era, then jams some monsters and sorcerers into the mix.

Her debut YA fantasy, A SHADOW BRIGHT AND BURNING (Random House, Fall 2016) tells the story of a young girl who is selected as the first-ever female sorcerer, the Chosen One who must save the empire. But the glamour of her new life hides enemies who would love to know her dark secret—that she might not be the Chosen One after all.