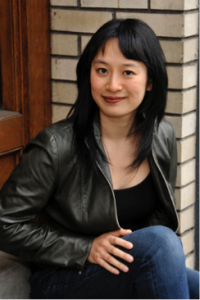 Fonda Lee writes science fiction and fantasy for teens and adults. ZEROBOXER (from Flux/Llewellyn) is her debut novel. Fonda is a recovering corporate strategist, an avid martial artist, a fan of smart action movies, and an Eggs Benedict enthusiast. 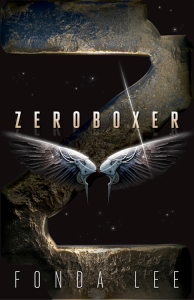 A rising star in the weightless combat sport of zeroboxing, Carr “the Raptor” Luka dreams of winning the championship title. Recognizing his talent, the Zero Gravity Fighting Association assigns Risha, an ambitious and beautiful Martian colonist, to be his brandhelm––a personal marketing strategist. It isn’t long before she’s made Carr into a popular celebrity and stolen his heart along the way. As his fame grows, Carr becomes an inspirational hero on Earth, a once-great planet that’s fallen into the shadow of its more prosperous colonies. But when Carr discovers a far-reaching criminal scheme, he becomes the keeper of a devastating secret. Not only will his choices place everything he cares about in jeopardy, but they may also spill the violence from the sports arena into the solar system.

ZEROBOXER is available for purchase at Amazon, Powell’s, Books a Million, Barnes & Noble, and Indiebound.

Kiersi: How did the idea of zeroboxing come to you?

Fonda:I worked for years as a corporate strategist at Nike, and the idea came to me to write an action-packed sports story that captured the pressure, money, and emotion surrounding celebrity athletes. Despite working in the athletic industry, as an avid martial artist, the only sports I have any particular enthusiasm for are combat sports, and given that I’m a science fiction and fantasy writer, the premise of my story was a no-brainer: futuristic prizefighting. How would combat sports evolve in a space-faring civilization? Zero gravity fights, of course.

Kiersi: All the sci-fi in this book feels incredibly real—the world-building is exquisite and introduces a lot of moral quandaries. Did you have to do a lot of research about genetics, zero gravity, and that sort of thing? How did it influence the way you designed Carr’s world?

Fonda: Before I started drafting Zeroboxer, I spent over six straight weeks researching genetic engineering, Martian colonization, and MMA. I have a background in traditional Asian martial arts, so I had to go beyond that by watching a lot of UFC fights and Brazilian jiu-jitsu tutorials, along with YouTube videos of astronauts in space. I read fight memoirs, went to several local MMA matches, and scoured the Internet for all sorts of information: from the effects of zero gravity on the human body, to current and proposed laws on genetic engineering, to how the Martian colonial calendar would differ from Earth’s.

I designed Carr’s world to be very much like our own; although the story takes place far in the future, so much about it (including the culture of sports celebrity and marketing, the determination of the athletes, the moral quandaries depicted) is familiar to us. Although all the research was crucial to the book, I was always cognizant of keeping it in the background. In the end, this book had to be about Carr’s personal journey.

Kiersi: What was revising this book like? What was hardest for you to get right?

Fonda: Revising the book went relatively smoothly thanks to the insightful guidance of my editor, Brian Farrey-Latz. The hardest part of the whole publication process for me was defining the book as YA or adult. When ZEROBOXER was on submission, I kept hearing from editors that it fell into a gray zone between YA and adult. When it was acquired, Brian had me do some “aging down” to make the book more YA (and even so, I still think it blurs the line a bit).

Kiersi: I am not a big sports enthusiast, but this book sucked me right in. I now desperately want to start watching MMA. Who is your ideal reader? Who do you think this book will speak to the most? Did you have anyone in mind when you wrote it?

Fonda: I always write my books with one ideal reader in mind: myself. That sounds egotistical, but I think it’s true for many authors. I write the books that I want to read, and I hope that people with like-minded tastes will like it.

I am a huge fan of “smart action” stories. Books and movies that deliver huge thrills but have a lot more going on: in-depth world building, nuanced characters, social commentary, moral dilemmas. Think The Matrix, Minority Report, Gattaca, Ender’s Game, Inception, Battlestar Galactica, District 9, and The Hunger Games, just to name a few. People who share my love for adrenaline plus brain food in their stories are my target audience.

How long have you been doing martial arts?

Since I was fifteen. I’m a lot older than that now. I’m not going to say how much older.

Who got you into it?

I got myself into it. I told my parents I wanted to take lessons. I think they were surprised I stuck with it permanently.

Symphonic rock/metal: Evanescence, Within Temptation, and Nightwish are on my playlist. Though when I’m trying to work out a tough scene, I need silence.

Was Carr inspired by anyone?

Carr is who I would want to be if I could be reincarnated as a teenage prizefighter living centuries in the future.

Did you do any odd jobs in high school?

I worked for a summer in a constituency office of a local member of legislature. This looked really good on my resume when it came to college applications, but basically it was just stuffing envelopes and answering the phone. I learned that some elderly people call their local politician’s office for all sorts of random stuff, from cars driving too fast on their street to fallen trees.

Zombie apocalypse, hands down. I own and can handle enough bladed weapons to potentially mount an effective home defense, particularly if the zombies are slow and stupid. Robots I’d be completely hopeless against. I have minimal technological savvy and can barely handle it when my dishwasher doesn’t work, so if an artificial intelligence came after me it wouldn’t even be a contest.

ZEROBOXER is available for purchase at Amazon, Powell’s, Books a Million, Barnes & Noble, and Indiebound.

Kiersi Burkhart grew up riding horses in Colorado. At sixteen, she attended Lewis & Clark College in Portland, Oregon, where she now lives and works as an author and freelance writer. With a background in Political Science and Constitutional Law, she does nothing with her degree and instead writes contemporary fiction for children and young adults. She also has a dragon tattoo with which she consults for inspiration. In her MG contemporary debut, SHY GIRL AND SHY GUY (Darby Creek/Lerner Books, Spring 2016), the only thing Hanna Abbott fears more than being sent to Second Chance Ranch is being asked to get on a horse. As ranch owner Ma Etty points out, for every troubled kid, there’s a horse that can help—and for Hanna, it’s a beautiful, abandoned horse called Shy Guy, who’s just as afraid of people as Hanna is of horses.

One thought on “The Debut Club: An Interview with Fonda Lee, author of ZEROBOXER”