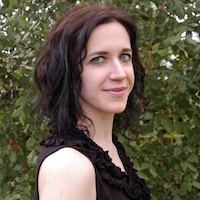 Though her family isn’t rock and roll royalty, Janet McNally always liked boys in bands. (She even married one.) She’s been obsessed with stories since she was small, and can talk about fairy tales and myths for hours (or write poems about them, as she did in her prizewinning poetry collection SOME GIRLS). She lives with her husband and three little girls in Buffalo, where she teaches creative writing at Canisius College.

Janet’s debut novel, GIRLS IN THE MOON (HarperCollins/HarperTeen, Fall 2016), is a Young Adult Contemporary. Phoebe and Luna Ferris haven’t grown up in the spotlight, but that’s only because their mother, Meg, quit her famous band when the girls were small. She hasn’t said much about it since. Now, Luna has a band of her own, and their still-famous dad hasn’t called in three years. The summer Phoebe turns seventeen, she goes to visit Luna in New York, determined to discover the truth about her family—and herself.

One thought on “Meet the Author: Janet McNally”