Sweet Sixteeners Perdita and Honor Cargill recently spoke to Fearless Fifteener Abi Ephinstone about her debut MG novels, THE DREAMSNATCHER (out now) and THE SHADOW KEEPER (February 25, 2016 from Simon & Schuster).

Abi Elphinstone grew up building dens, hiding in tree houses and running wild across highland glens in Scotland. She worked as a teacher in Africa, and England.

About THE DREAMSNATCHER and THE SHADOW KEEPER:

THE DREAMSNATCHER Twelve-year-old Molly Pecksniff wakes one night in the middle of the forest, lured there by a recurring nightmare – the one with the drums and the rattles and the masks. The Dreamsnatcher is waiting. Because Moll is more important than she knows…The Oracle Bones foretold that she and her wildcat Gryff are the only ones who can fight the Dreamsnatcher’s dark magic. Suddenly everything is at stake, and Moll, Alfie, a runaway from the enemy gang, and her friend Sid, are drawn into a world full of secrets, magic and adventure.

THE DREAMSNATCHER is available from: Amazon, Powells, Books A Million, Barnes & Noble, and IndieBound.

And in the sequel, THE SHADOW KEEPER, outlawed from the forest, Moll, Gryff, Sid and Alfie continue their adventures in a secret cove down by the sea…

THE SHADOW KEEPER is available from: Amazon, Books A Million, and Barnes & Noble.

END_OF_DOCUMENT_TOKEN_TO_BE_REPLACED 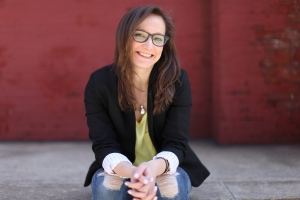 Kate McGovern has taught theatre and language arts to middle schoolers in Boston, New York, and London. A graduate of Yale and Oxford, she currently lives in Cambridge, Massachusetts, where she was born and raised.

Seventeen-year-old Rose Levenson has a decision to make: Does she want to know how she’s going to die? Because when Rose turns eighteen, she can take the test that tells her if she carries the genetic mutation for Huntington’s disease, the degenerative condition that is slowly killing her mother.

With a fifty-fifty shot at inheriting her family’s genetic curse, Rose is skeptical about pursuing anything that presumes she’ll live to be a healthy adult-including her dream career in ballet and the possibility of falling in love. But when she meets a boy from a similarly flawed genetic pool and gets an audition for a dance scholarship across the country, Rose begins to question her carefully laid rules.
A heartrending but ultimately uplifting debut novel about learning to accept life’s uncertainties; a perfect fit for the current trend in contemporary realistic novels that confront issues about life, death, and love.

Ronni Arno writes middle grade and young adult novels, because she thinks kids are cool, and so are the books they read. Ronni lives on the coast of Maine with her husband, two daughters, and a dog named Hazel. Her debut, RUBY REINVENTED, publishes with Simon & Schuster/Aladdin on November 3, 2015. Her next book publishes with Simon & Schuster/Aladdin in Summer 2016. When she’s not writing, Ronni stalks her kids for story ideas, kayaks, and eats chocolate… but not usually at the same time.

When twelve-year-old Ruby learns that her supposed BFFs are only friends with her because her of her famous parents, she finds a place as far from fake and phony Hollywood as she can get: a Maine boarding school. In her panic to distance herself from her star-studded folks, Ruby tells her new friends that she’s an orphan. She feels awful lying to her weird but wonderful roommate Summer (the first real friend Ruby has ever had), but not awful enough. In fact, now that nobody’s comparing her to her perfect parents, Ruby can finally let her own talents as a dress designer take center stage. But when Ruby finds herself connecting with a boy who really did lose his parents, she’s torn between who she is and who she’s pretending to be. And with Parent’s Weekend approaching, she must find a way to keep her secret… without losing her new best friend, the trust of her first crush, and the chance to shine as the designer of her own fashion show.

END_OF_DOCUMENT_TOKEN_TO_BE_REPLACED

Sweet Sixteener Shannon Parker recently spoke to Fearless Fifteener Ingrid Sundberg about her debut contemporary YA novel, ALL WE LEFT BEHIND (November 1, 2015 from Simon Pulse).

Ingrid Sundberg holds an MFA in writing for children from the Vermont College of Fine Arts and an MFA in screenwriting from Chapman University. She grew up in Maine, but now lives in sunny California, where she misses the colors of autumn. She loves polka dots, baking, and dying her hair every color of the rainbow. All We Left Behind is her first novel.

About ALL WE LEFT BEHIND: 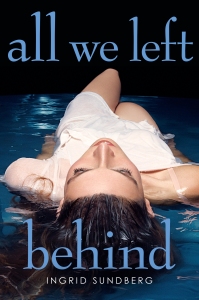 An evocative and tantalizing debut novel! For teen couple Marion and Kurt, every kiss unravels memories they would both rather forget, and long-buried secrets threaten to tear them apart. Explosive together and hollow apart, Marion and Kurt may be totally wrong for each other – or more right than they ever thought possible.

ALL WE LEFT BEHIND is available from: Amazon, Powells, Books A Million, Barnes & Noble, and IndieBound. END_OF_DOCUMENT_TOKEN_TO_BE_REPLACED 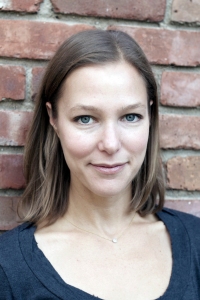 Marcy Beller Paul still has all the notes she passed in seventh grade (and knows how to fold them). She graduated from Harvard University in Massachusetts and worked as an editor in New York before moving back to New Jersey, where she now lives with her husband and two children. Underneath Everything is her first novel. 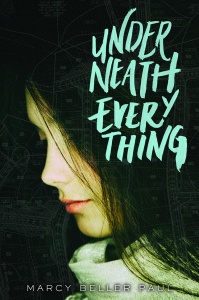 Mattie quit the social scene for a reason, but by senior year she’s sick of missing things. When she drags her best–and only–friend Kris to the bonfire, Mattie is drawn back into an intoxicating–and toxic–relationship that blurs the boundary between reality and fantasy, love and loyalty, friendship and obsession.

UNDERNEATH EVERYTHING is available from: Amazon, Powells, Books A Million, Barnes & Noble, and IndieBound. Find signed copies at Books of Wonder. END_OF_DOCUMENT_TOKEN_TO_BE_REPLACED 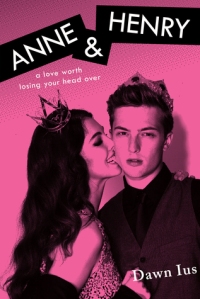 In this creative retelling of the infamous—and torrid—love affair between Anne Boleyn and King Henry VIII, history collides with the present when a sizzling romance ignites in a modern-day high school.

Henry Tudor’s life has been mapped out since the day he was born. But ever since the death of his brother, the pressure for Henry to be perfect has doubled. And now he’s trapped: forbidden from pursuing a life as an artist or dating any girl who isn’t Tudor-approved. Then Anne Boleyn crashes into his life. Wild, brash, and outspoken, Anne is everything Henry isn’t allowed to be—or want. But soon Anne is all he can think about. Henry is willing to do anything to be with her, but once they’re together, will their romance destroy them both?

END_OF_DOCUMENT_TOKEN_TO_BE_REPLACED

As a teen, Ann Jacobus was always in the chorus of plays and musicals, never the lead. She earned an MFA in Writing for Children and Young Adults from Vermont College of Fine Arts. She and her family spent many years in the Island Kingdom of Bahrain in the Arabian Gulf and in Paris, France. She now lives in San Francisco where she writes, reads, teaches writing, and volunteers weekly on a suicide crisis line.

About ROMANCING THE DARK IN THE CITY OF LIGHT:

Haunting and beautifully written, with a sharp and distinctive voice that could belong only to this character, ROMANCING THE DARK IN THE CITY OF LIGHT is an unforgettable young adult novel.

Summer Barnes just moved to Paris to repeat her senior year of high school. After being kicked out of four boarding schools, she has to get on the right track or she risks losing her hefty inheritance. Summer is convinced that meeting the right guy will solve everything. She meets two. Moony, a classmate, is recovering against all odds from a serious car accident, and he encourages Summer to embrace life despite how hard it can be to make it through even one day. But when Summer meets Kurt, a hot, mysterious older man who she just can’t shake, he leads her through the creepy underbelly of the city-and way out of her depth.

When Summer’s behavior manage to alienate everyone, even Moony, she’s forced to decide if a life so difficult is worth living. With an ending that’ll surprise even the most seasoned reader, Ann Jacobus’ ROMANCING THE DARK IN THE CITY OF LIGHT is an unputdownable and utterly compelling novel.

ROMANCING THE DARK IN THE CITY OF LIFE is available from Amazon, Powell’s, Barnes & Noble, Books-A-Million, and Indiebound.

END_OF_DOCUMENT_TOKEN_TO_BE_REPLACED

My Tweets
The Sweet Sixteens
Create a free website or blog at WordPress.com.