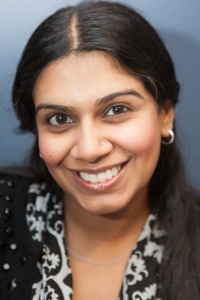 Sona Charaipotra & Dhonielle Clayton met while attending the New School’s acclaimed Writing for Children MFA program. Sona is a journalist who has written for the New York Times, People, Parade, Cosmopolitan, and other major media. Dhonielle is a librarian at a middle school in Harlem and taught English at a cutthroat ballet academy. Together, the pair co-founded CAKE Literary, a boutique book packaging company with a decidedly diverse bent. Find CAKE on the web at CAKELiterary.com or on Twitter: @CakeLiterary.

Black Swan meets Pretty Little Liars in this soapy, drama-packed novel featuring diverse characters who will do anything to be the prima at their elite ballet school.

Gigi, Bette, and June, three top students at an exclusive Manhattan ballet school, have seen their fair share of drama. Free-spirited new girl Gigi just wants to dance—but the very act might kill her. Privileged New Yorker Bette’s desire to escape the shadow of her ballet star sister brings out a dangerous edge in her. And perfectionist June needs to land a lead role this year or her controlling mother will put an end to her dancing dreams forever. When every dancer is both friend and foe, the girls will sacrifice, manipulate, and backstab to be the best of the best.

Jennifer:  First, I think it is so awesome that you two co-wrote TINY PRETTY THINGS. I’d love to know more about how you became co-writers and a little about your process of working together.

Sona: We met as grad students in the Writing for Children MFA program at the New School. We were the chatterboxes of the class, and hung out a lot, eating pizza or Chinese food and talking about our favorite TV shows (like The Vampire Diaries) and books. Over and over again, we came back to one particular conversation — about not seeing ourselves in books as kids and teens. So we wanted to do something to get more diverse books out there.

Dhonielle: One day, I told Sona about my time teaching English at a pre-professional ballet academy. It’s such a fascinating, insular world, one I always wanted to write about. And she was very excited, because we’d both danced as kids — not nearly professionally. So I suggested we collaborate on it. And she mentioned doing something with a Pretty Little Liars vibe, and that was it. We have different strengths and things that excite us about books. I love building worlds and characters, and she’s a master at plot and pace. We sort of fit together like puzzle pieces.

Jennifer: As a huge fan of dance movies, I loved learning all about the dance academy in TINY PRETTY THINGS, and what it takes to reach the highest level of ballet. You totally immerse the reader in the experience. Tell me a little bit about the research you did and experiences that informed this.

Dhonielle: My first job out of college was as an English Literature teacher at the Kirov Academy of Ballet of Washington, DC, so I was able to be surrounded by pre-professional ballet dancers. They were so dedicated and talented. I read a lot of ballet memoirs, watched ballets, and played ballet clips over and over on YouTube, read dance magazines, took ballet classes, and studied ballet position books.

Sona: We also watched lots of ballets — and did a celebratory trip to see The Nutcracker last year! And some of Dhonielle’s students read the manuscript at different stages to ensure we were getting details right.

Jennifer: New York City was such an integral part of the story; it was practically a character in itself. Let’s say your reader wanted to take a TINY PRETTY THINGS tour of New York City – what should his or her itinerary be?

Sona: Lincoln Center of course! It’s really the heart of the little part of Manhattan TINY PRETTY THINGS calls home. It’s a great place to catch a performance — and not all of them will set you back several hundred bucks! I took my daughter to a behind-the-scenes look at ballet — a cute mommy-and-me trip — and tickets were only $20 a piece.

But also, there’s so much great food! Holding back on that was hard for me when working on the book, but June sinks her teeth into spaghetti and meatballs and Korean food (Bann on 50th is a go-to for me!).

Jennifer: Imagine your perfect reader. How would you describe that person?

Sona: To me, it’s that kid — maybe fifteen or sixteen-ish, looking for herself on the page. She’s an avid reader, loves a good page-turner with all the drama and romance and mystery. And when she sees the diversity on the page, she realizes that she, too, can be the hero of the story. Of any story. It’s essentially me as a teen — that’s what I was looking for.

Dhonielle: A kid who wants to fall into the ballet world and get wrapped up in a great mystery.

Sona: Uh, does reporter for People magazine count? I did wear flip-flops on the red carpet all the time. No one was looking at my feet.

Dhonielle: I have yet to have one… perhaps the future will be bright for odd jobs.

Three books everyone should read?

Sona: How do I pick just three? ANNE OF GREEN GABLES by LM Montgomery, LORD OF THE FLIES by William Golding, and BORN CONFUSED by Tanuja Desai Hidier.

Dhonielle: HARRIET THE SPY by Louise Fitzhugh, THE PEOPLE COULD FLY by Virginia Hamilton, and NINTH WARD by Jewell Parker Rhodes.

Sona: With two little ones, I’ll take whatever time I can get!

Dhonielle: I used to be a night time person, but now I do my best work in the morning.

Sona: Oh, I think “Lemon Parade” by Tonic is June’s song. It captures her eternal angst.

Jennifer Maschari writes books about kids who do brave things. When she’s not writing, she works as a math and language arts tutor. She lives in Ohio with her husband and two bulldogs who only sometimes listen to her. In her debut MG novel, THE REMARKABLE JOURNEY OF CHARLIE PRICE, a young boy struggling in the wake of his mother’s death follows his sister into a magical world identical to their own with one key difference – Mom is alive. But this idealized other world holds terrifying secrets, and he’ll have to defeat monsters both real and imagined or risk losing himself, his sister, and the true memory of his mother forever.

4 thoughts on “The Debut Club: An interview with Sona Charaipotra and Dhonielle Clayton, authors of TINY PRETTY THINGS”