In keeping with her scattered Gemini nature, Angelica R. Jackson has far too many interests to list here.

She has an obsession with creating more writing nooks in the home she shares with her husband and two corpulent cats in California’s Gold Country. Fortunately, the writing nooks serve for reading and cat cuddling too.

Other pastimes include cooking for food allergies (not necessarily by choice, but she’s come to terms with it), photography, and volunteering at a local no-kill cat sanctuary.

Avery Flynn arrives for a visit at her Uncle Tam’s, eager to rekindle her summertime romance with her crush-next-door, Daniel. But Daniel’s not the sweet, neurotic guy she remembers–and she wonders if this is her Daniel at all. Or if someone–or something–has taken his place. Her quest to find the real Daniel–and get him back–plunges Avery into a world of Fae and changelings, where creatures swap bodies like humans change their socks, and magic lives much closer to home than she ever imagined.

CROW’S REST is available for purchase at Amazon, Books A Million, and Barnes & Noble.

Heidi: Fae and changelings and romance, oh my! The story sounds so rich. How did the idea first start to germinate?

Angelica: CROW’S REST is actually the second book I wrote, and in the first one (an historical ghost story called SPIRITS FROM THE VASTY DEEP) I was playing around with themes of possession and dark historical events. And although I love that story and will come back to it eventually, I was looking for a little more humor and fun possibilities in my next project. After watching a pair of crows hunt a mole in my backyard, and seeing firsthand how very intelligent and wily they are, a “what if crows aren’t always just crows?” question got my brain working.

And since I have a background as a storyteller, I had a storehouse of Celtic mythology to tap into for existing stories on changelings, shapeshifters, and tricksters. The result was my own creation: a corbin, a creature who crosses into our world by occupying crow bodies–and sometimes humans. That scenario just seemed like it would lend itself to all kinds of hijinks!

Heidi: I see you have a broad range of interests, from animal rescue to web design to history, and of course, writing. How and when did you first know you wanted to write novels?

Angelica: I’ve always wanted to be a writer, but I started out doing freelance articles and short stories. The short stories were my focus because I first attempted science fiction, and at the time (I started submitting at fifteen years old), short fiction was the way to break into the industry. I never have sold a science fiction piece (I no longer believe that’s my strength), but I did finally sell a short story to Hunger Mountain–a middle grade historical, go figure.

I didn’t necessarily think I would ever write a novel–they seemed kind of intimidating–but then I read THE BAROQUE CYCLE by Neal Stephenson. Each of those books is thicker than a brick, and reading them requires you to keep so many story threads collected in your mind, because he eventually brings them all together. By the time I’d finished those books, I felt like I had entire new pathways written in my brain, and tackling a novel draft didn’t seem nearly so unreachable.

Heidi: Part of the inspiration for the setting is drawn from Preston Castle, which you are involved with photographing. Where else did the story take you, in terms of research?

Angelica: The town of Crow’s Rest is an amalgamation of several nearby Sierra foothill towns: Ione (where Preston Castle is), Nevada City (a quirky haven for artists and outcasts), and Placerville (becoming more urbanized, but oddly squeezed into a small footprint because of the terrain). So that meant I had lots of excuses to explore my own backyard and nearby towns, and the Celtic mythology tie in meant I also had a great excuse to go to Ireland and the UK. My husband and I made that trip in May of 2014, and I came back with over three thousand images–some of which made it into my book trailer.

Heidi: CROW’S REST has a sequel in the works! What is your advice to an author who’s planning a series?

Angelica: I definitely recommend outlining the rest of the series, even though you may not stick with it exactly. The sequel is following the synopsis I drew up fairly closely as far as plot points, but the details change as I go along so that keeps it interesting.

I did end up having to go back to book one to make a major change, because I’d inadvertently written my characters into a corner they couldn’t move out of in book two–fortunately, we were still in edits on book one, so I was able to do that. If I’d gotten to that point in No Man’s Land after CROW’S REST was already out, I would have been in trouble, so I’m very glad I was in a place to fix it. A very good reason to follow the advice of starting the next book.

Hmm, Tatterskins or maybe The Twelve Dancing Princesses. Yes, I reserve the right to have more than one favorite.

What pets do you have?

Currently, two cats of our own, and part-interest in the cats and dogs where I volunteer. Fat Kitty City has over one hundred cats at the sanctuary, and the county animal shelter has a fluctuating number of cats and dogs (of which I also have more than one favorite during any given week).

What sort of music do you write to?

While I’m actually writing, it has to be classical or jazz instrumental, or I get distracted by trying to sing along. Both CROW’S REST and NO MAN’S LAND have songs I’ve written for them, also, so I use those to drop me back into the story as necessary.

Most of my jobs have been fairly pedestrian retail jobs, but they have featured some odd characters on both sides of the counter, lol.

First thing you do when you wake up?

Say, “Pippin, you’d better not let a live rat go in here again!” My tabby boy has a history of waking me up by bringing me not-quite-dead gifts, which then end up hiding in our bedroom furniture until I can catch them (barehanded) and put them back out.

If you had magical powers, what would they be?

The magical powers would more likely be a curse, with my luck. But if I got to pick, I’d go for languages–being able to speak and understand all human and animal languages. But I’d want to be able to turn it on and off, because I don’t really need to hear dogs say, “Ball! Ball? Ball! BallBallBall” all day long.

CROW’S REST is available for purchase at Amazon, Books A Million, and Barnes & Noble. 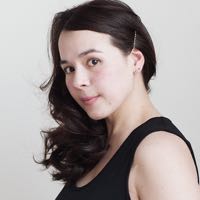 Heidi Heilig grew up in Hawaii where she rode horses and raised peacocks, and then she moved to New York City and grew up even more, as one tends to do. Her favorite thing, outside of writing, is travel, and she has haggled for rugs in Morocco, hiked the trails of the Ko’olau Valley, and huddled in a tent in Africa while lions roared in the dark. She lives in Brooklyn with her husband, son, and their pet snake. They do not own a cat.

In her YA fantasy debut, THE GIRL FROM EVERYWHERE (Greenwillow/HarperCollins, February 16, 2016), Nix has grown up time-traveling on her father’s ship, navigating from one map to another—including those of history, myth, and legend. But then her father finds a map of 1868 Honolulu. Determined to travel there to save her mother’s life, he pulls Nix into a political intrigue involving sugar barons, opium dealers, and a plot against the last King of Hawaii, but they both know changing history risks erasing Nix’s very existence.