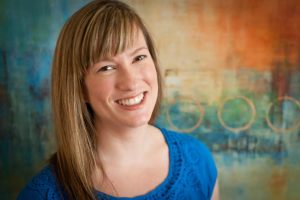 Jennifer Chambliss Bertman was born and raised in the San Francisco Bay Area, and now lives in Colorado with her family. She studied writing and dance at the University of California, Irvine, and earned her MFA in Creative Writing from Saint Mary’s College in Moraga, California. When she was eighteen, she interned for a magazine in Manhattan and has worked in publishing ever since. A sequel to BOOK SCAVENGER and a third stand-alone mystery are forthcoming in 2016 and 2017.

Find Jennifer on her website, Twitter, and Goodreads. And make sure to visit BookScavanger.com to follow BOOK SCAVENGER news and play the game in real life. 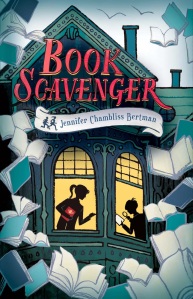 Twelve-year-old Emily is on the move again. Her family is relocating to San Francisco, home of her literary idol: Garrison Griswold, creator of the online sensation Book Scavenger, a game where books are hidden all over the country and clues to find them are revealed through puzzles. But Emily soon learns that Griswold has been attacked and is in a coma, and no one knows anything about the epic game he had been poised to launch. Then Emily and her new friend James discover an odd book, which they come to believe is from Griswold and leads to a valuable prize. Emily and James must race to solve the puzzles Griswold left behind before Griswold’s attackers make them their next target.

BOOK SCAVENGER is available for purchase at Amazon, Powell’s, Books A Million, Barnes & Noble, and Indiebound.

Jenn: As a book about books, book lovers, and a book treasure hunt, BOOK SCAVENGER is such fantastic meta-fiction for tweens. How did your own love of books (I’m running with a hunch here) influence this story?

Jennifer: My main goal when I started BOOK SCAVENGER was to come up with a story that I would have loved when I was a kid. I was an avid reader (your hunch was right), and three of my favorites were THE WESTING GAME, FROM THE MIXED-UP FILES OF MRS. BASIL E. FRANKWEILER, and THE EGYPT GAME. What appealed to me most about these stories is that they featured characters who were realistic and relatable—no magical powers or extreme talents, in other words, just like me—and yet they got caught up in extraordinary mysteries or adventures. Trying to create something like those books (along with a good dash of inspiration from the movie Goonies) is what influenced this story in the beginning.

Along with being an avid reader, I’m also just plain fascinated by the publishing industry and the craft of bookmaking, and I’m passionate about children’s books in particular. Characters like Hollister and Mr. Griswold and Emily’s parents represent different aspects of this fascination of mine, for sure, and the children’s books I reference throughout have a special meaning to me, especially in relation to this story. BOOK SCAVENGER has been described as a love letter to San Francisco, and I think it’s just as much a love letter to the world of books as well.

Jenn: When and how did you know that you wanted to be a writer?

Jennifer: Ever since elementary school. I didn’t always believe I could be a professional writer, but I’ve always wanted to be one.

Jenn: There’s so much rich literary history that you draw from in this book, from Edgar Allan Poe and Rufus Griswold to Jack Kerouac—and that’s not even getting into all the clever work with ciphers. How did research impact your writing process?

Jennifer: Research was, and is, huge for me. I love reading about different topics related to the story I’m working on. You never know when you’ll come across that random tidbit that sparks a fire in your imagination. Many of my characters and moments in the plot wouldn’t exist in their present state if I hadn’t jumped down that rabbit hole of research. Garrison Griswold would be a totally different person if I hadn’t researched Poe and armchair treasure hunts. I got the idea for Mr. Quisling’s cipher challenge when I read that Poe had done something similar when he was writing for a weekly paper.

Jenn: What’s been the most unexpected part of the publishing process for you?

Jennifer: This might be an odd answer, but I think I’ve been surprised at how well everything has gone. I’ve been working seriously toward being an author for twenty years now, and have also worked in the publishing industry, so I didn’t go into this experience completely naive to what some of the realities would be. I was braced for possible challenges that I know are just part of the business. The submission process can take an incredibly long time and can be very disappointing—I was prepared for that—but after my agent went on submission with BOOK SCAVENGER, we heard back from an interested editor within a week. A few days later, three more editors had expressed interest. We had an official offer in two weeks, and from a dream editor who wanted to invest in me beyond just the one book. I never would have expected any of that. (Daydreamed about, sure, but not truly expected it to happen.) And beyond that, authors typically get little input in what the look of their book will be, and that was the case for me, but the design of BOOK SCAVENGER is like someone pulled it out of my brain. Sarah Watts’s illustrations are EXACTLY the style I had hoped for, which blew my mind because that wasn’t something my editor and I discussed. I could go on and on with things that have been happy surprises: I wasn’t expecting to sell foreign rights at all, let alone to seven languages before BOOK SCAVENGER was even published, the reception from booksellers and early readers has been wonderful, and my publisher has been so encouraging and enthusiastic about some of the crazy marketing ideas I’ve had. It’s been a wild and wonderful ride, and I’m trying to appreciate every moment.

I polished silver for a jewelry designer. I also did some turtle-sitting once while a neighbor was on vacation. If my memory serves me, I don’t think that ended very well.

I’m addicted to mochas. Does that qualify as a snack?

Both. A house isn’t a home without shelves filled with paper books (REAL books, not “designer” books), and there are few things more comforting than physically turning the pages of a good book on a rainy day, but reading digitally can be very practical and convenient.

You’re hosting a literary dinner party. Which three writers (living or deceased) would you invite?

BOOK SCAVENGER is available for purchase at Amazon, Powell’s, Books A Million, Barnes & Noble, and Indiebound. 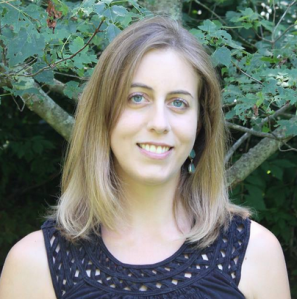 Jenn Bishop is a former youth services and teen librarian. She is a graduate of the University of Chicago, where she studied English, and Vermont College of Fine Arts, where she received her MFA in Writing for Children and Young Adults. Jenn lives just outside of Boston, where she roots for the Red Sox, no matter how terribly they are playing. Her MG debut THE DISTANCE TO HOME (Knopf Children’s/Random House, June 2016) alternates between two baseball-filled summers—last summer, when Quinnen was struggling to repair her relationship with her older sister, and this summer, when she is reeling from her sister’s death.